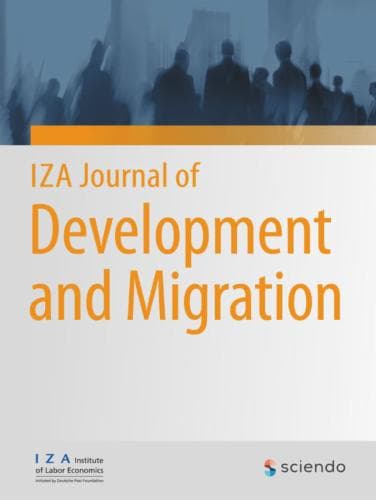 IZA Journal of Development and Migration

IZA Journal of Development and Migration

A growing wage gap between immigrant and native-born workers is well documented and is a fundamental policy issue in Canada. Most studies investigate its cause by looking at the non-portability of foreign credentials and systematic differences in the postarrival accreditation of these credentials. Earlier studies found that a foreign education provides a significant wage return with a slight discount in Canada (Aydemir and Skuterud, 2005). Since information on the location of study was not available before the 2006 census, these studies assume that immigrants who came to Canada at or after the age of 25 years could be treated as foreign educated, and information on the place of birth was then used to identify their location of study. However, data from the 2006 census show that more than 24% of these immigrants obtained their highest degree in Canada, with this ratio jumping to 66% for those coming from the Middle East in the same age group. When the measurement error due to this imputation is addressed (Fortin et al., 2016; Aydede and Dar, 2016), the evidence shows that immigrants’ foreign education appears to be significantly discounted in Canada even if immigrants work in jobs that match their training in terms of the level of schooling and specialization (Aydede and Dar, 2017).

Nevertheless, it is quite possible that wage differences, commonly attributed to the lower quality of foreign credentials or occupational mismatch, merely reflect lower wage offers that immigrant workers receive due to risk aversion among local firms faced with an elevated degree of asymmetric information associated with unfamiliar ethnic backgrounds. This could, in turn, strengthen the bargaining power of firms, enabling them to extract a significant portion of the surplus - the difference between the immigrants’ reservation wage and what they could receive in the market. The aim of this study was to empirically investigate the effect of wage bargaining in labor markets on the wage gap between foreign- and Canadian-educated workers.

To analyze the determinants of the gap between potential and realized wages of migrant and native-born workers, we use the concept of a stochastic wage frontier (SWF), whose precursor was the production frontiers designed to study output losses due to technical inefficiency. Unlike various decomposition methods analyzing the wage differentials between immigrant and native-born workers, the SWF model recognizes that differences in observed wage earnings reflect not only variations in the “potential” productivity but also differences in departures from this potential productivity due to market imperfections. The frontier approach defines “efficiency” as the maximum output that firms can produce from a given set of inputs or the maximum wages workers can earn from a given set of human capital characteristics. The former is given by the production frontier and the latter by the wage frontier, both of which can be stochastic. Inefficiency on the production side is then the inability to produce on the frontier, and the output loss represents the “technical inefficiency” of the firm. Similarly, the inability of workers to earn the highest possible (frontier wage) from their human capital endowments implies a wage loss, which represents the extent of “wage inefficiency”. Hence, wage discrepancies in labor markets are caused by not only productivity-related characteristics but also differences in the degree of wage inefficiency. We find that the average ratio of actual wages to frontier (potential) wages is 73.2%, which suggests that, on average, workers earn 26.8% less than their potential (frontier) wages in 2006, which is line with the findings for the US and Germany (Lang, 2005). What is then the difference in potential wages that immigrant and native-born workers could be expected to achieve in Canadian labor markets, and how would the departure from this potential wage affect the gap in actual wages between these two groups?

We identify the differences in potential wage earnings in three categories that allow us to explain the wage gap by nativity, location of education, and occupational match. This enables us to determine to what extent the source of the gap in potential wages is the result of differences in human capital attributes, separate from differences in the market response to the same human capital endowments. It is realistically plausible that if this departure from the ideal wage is not the same for immigrant and native-born workers, the gap in actual wages could be smaller or larger depending on how the 26.8% average inefficiency is distributed among workers. For illustrative purposes, suppose that there are two groups of workers and that the average wage in Group 1 is higher than that in Group in the first graph in Figure 1). If the market response to their human capital endowments is not symmetric, the average wage for these groups may well be the same, that is, pointing to the greater difficulty or inefficiency () of Group 1 translating their human capital into earnings in the labor market. The second graph in Figure 1 shows the opposite case where the potential wages are the same but the market response is not the same. Mincerian-type earning functions estimated by ordinary least squares (OLS) assume that the departures from the potential wage, , are not systematic and E() is zero, which is rejected by our tests as described in the following sections. Hence ignoring this, as is the case with OLS-based estimates, would result in biases that can be avoided through the frontier approach, which allows us to separate potential wage earnings from actual wage earnings and identify how much of the observed wage gap between immigrant and native-born workers is attributable to departures from their potential wage earnings as well as to differences in human capital endowments. It is also different from the Oaxaca–Blinder decomposition, which involves estimation of separate wage equations for different groups based on the assumption that the intrinsic value of each human capital endowment is comparable for these groups. This would be a valid assumption for a gender decomposition; for example, it would be highly unrealistic for foreign- and Canadian-educated immigrants, as the value of their fields of study, education degrees, and work experiences are not likely to be equivalent.

As we show below, a significant part of the observed wage gap between immigrant and native-born workers appears to be driven by differences in human capital endowments rather

than differential market responses to the same attributes. Our findings highlight the limitations of public programs designed to improve the postarrival market responses to immigrants’ human capital endowments because the location of study remains a fundamental determinant of the wage gap regardless of workers’ nativity and occupational match. However, the results also suggest that the ethnic background associated with specific source countries plays an important role in the observed wage gap even among those who work in matching jobs and possess an educational degree obtained in Canada. This evidence underlines the importance of risk aversion on the demand side of the labor market in the economic assimilation of immigrants. Although this adverse market response can possibly be addressed with public policies, risk aversion among employers is neither widespread nor substantial in size to reduce the overall overserved wage gap. The rest of the paper is organized as follows. Section 1 discusses the conceptual background. Section 2 summarizes previous research. Section 3 introduces the data and contains a descriptive analysis of education–occupational matching measures used in this paper. Econometric results and a discussion of our findings are given in Section 4. Concluding remarks are provided in Section 5.

The effect of YSM on the wage gap between native-born and immigrant workers by NHRIC, education degrees, and location of study – 2006 and 2011

The wage gap across workers by nativity, NHRIC, education degrees, and location of study – 2006 and 2011

SWF estimates of the wage gap across workers by nativity, NHRIC, education degrees, and location of study with heteroskedastic inefficiency – 2006 and 2011