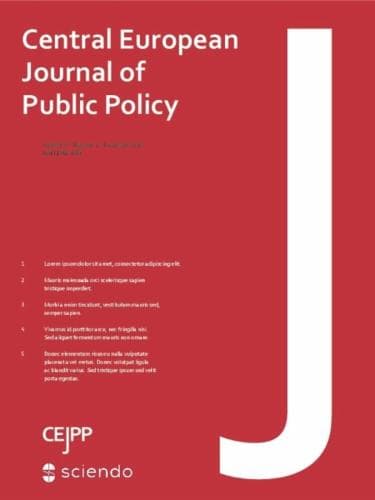 Although many people today hardly read paper books, there remains a strong professional community that is fortunately still engaged in this pious activity. Perhaps one of the distinguishing features of the future will be that truly quality professionals – and not only economists – are and will be consumers of quality printed publications. We will now briefly introduce one of them.

The book under review, Fiscal Decentralization Reforms (ISBN 978-3-030-46757-9), was published as part of the Public Administration, Governance, and Globalization book series edited by Prof. Ali Farazmand, professor at the School of Public Administration at Florida Atlantic University. The authors of the presented publication are researchers in the field of public administration: Michal Plaček, František Ochrana, Milan Jan Půček and Juraj Nemec from Charles University, Masaryk University, and Ambis College. The book has a steady readership all over the world, as evidenced, among other things, by the nearly 2200 downloads of the book in electronic form.

Let us add that the concept of the book is reviewed first, followed by the contents of the book itself. The work under review surveys the current theory of fiscal decentralisation, drawing on the foreign literature published in respected journals in the field of public administration, tax theory and operational research. Although much has been written about the effects of fiscal decentralisation, the authors provide a readable summary of the current state of the art. They place a strong emphasis on accountability as one of the key mechanisms associated with decentralisation and, indirectly, a major influence on the effectiveness of local governments.

Regarding the contents, the theoretical part is followed by a description of the process of decentralisation reforms in Central and Eastern Europe. The authors also identify the main benefits. This section can serve as a starting point for other authors who wish to focus their research on decentralisation in the Central and Eastern Europe context.

The following section is devoted to the case study. The case study analyses how fiscal decentralisation is associated with the efficiency of local governments in the Czech Republic. This section is extremely relevant even almost 2 years after the publication of the book. Not only that, it is an issue that other countries such as the USA and Spain are also facing. The importance of this problem has been brought to light once again by the crisis in Ukraine and the fiscal imbalances it has caused. The issue of excessive decentralisation is specifically addressed. For the sake of interest, there are 6250 municipalities in the Czech Republic today, of which over 90% are classified as so-called small and medium-sized, which makes public administration in the Czech Republic as extremely difficult and specific. Almost 80% of all municipalities have a size of up to 1000 inhabitants. At the same time, only 17.2% of the population of the Czech Republic lives in these municipalities.

In order to measure the relative efficiency of municipalities, the authors have prepared their own set of indicators based on structured interviews with public sector experts. The authors used data mining to create a unique dataset that includes all 6250 municipalities in the Czech Republic. The authors efficiently and creatively linked relevant information from the Czech Statistical Office database (demography, politics) with the State Treasury Monitor database (data on the management of all municipalities in the Czech Republic). This dataset enabled expert analysis of the issue in a broader context, that is, not only in the context of the size of the municipality, but also in the functioning of democratic mechanisms of accountability, transparency or political orientation.

Based on the results of the econometric analysis, the prestigious authors make a series of important recommendations for public policy. These are not only recommendations such as increasing the share of the municipality's own revenues at the expense of transfers, for example, but also recommendations on how to coordinate the provision of public services and goods efficiently, or how to increase the accountability of politicians and how to enable citizens to better control the municipality's management and disposal of assets.

The book is of particular scholarly importance and value because it comprehensively brings together all the important theories of fiscal federalism. Such a comprehensive summary has been lacking in the literature to date. Despite the short time since its publication, the book has received several citations from foreign authors in journals indexed in the Web of science and Scopus databases (e.g. Journal of Operational Research, Health Promotion International).

The book is not only an ‘academic endeavour’, but also it already has important social impacts – for example, it was already cited in publications of the International Monetary Fund and the Organisation for Economic Co-operation and Development (OECD). The book has also been an inspiration for public policy in developing countries (as a very rare example of linking academia and public administration in less-developed countries, the Indonesian government officially invited authors for the study visit, to present their results).

We firmly believe that the presented book will find its readers not only among academics, but also among the wider professional public. It is also suitable for students, especially those in doctoral programmes.