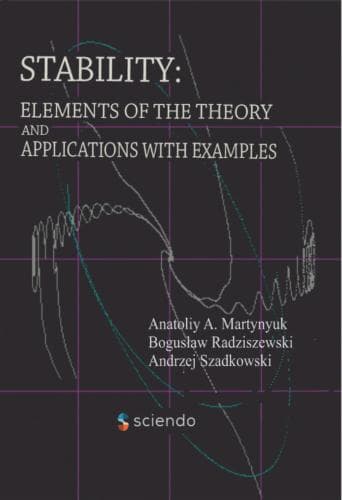 Stability: Elements of the Theory and Applications with Examples

This book is intended to familiarize the readers with basic concepts, and classic results of stability theory stated in a way as required by the rigorous rules of contemporary mathematics and, simultaneously, to introduce the learners to broad elds of not only the stability theory but also applications involved. The emphasis is put on various dynamical systems which are defined by different branches of science and through diverse areas of human activity but always with care not to exceed the basic classical approach in the presentation. All in all, the authors plan to combine the textbook-like with encyclopaedia-like content. Another special goal of the authors is to attract the reader's attention to those aspects of theories whose incomplete understanding may lead to inaccuracies or errors. Sometimes, anyway just as designed, the offered information is limited to the pure statements of facts without any proofs. The reader should consult the references to find out missing pieces of information.

This book also makes use of numerical (computer) computations. Most of the material contained in the book has already been published, a large part in various works of the authors. Fragments of several chapters come from published works of other authors – some excerpts, particularly relating to basic concepts, and some classic results are taken from outside sources.

The book is offered as a textbook for the college-level students or as an aid to the PhD students interested in practical problems of the stability theory. The prerequisites are not demanding - the basic knowledge of calculus, complex functions, and linear algebra which are covered in the suitable, elementary courses is required.

The first two chapters include what is typically covered in most introductory courses for students. The first chapter contains definitions of various types of stability; the second commences classic stability theorems regarding ordinary differential equations, but the most basic, applicable in technical sciences. The linear equations are treated more broadly, which creates a foundation for the linear approximation of differential equations in the stability research.

Chapter three deals with integral inequalities and their application to the stability studies. Integral inequalities, both linear and nonlinear, are effectively applied in the development of the direct Lyapunov method when the boundedness and stability of motion of nonlinear weakly coupled systems are studied.

Chapter four is predominantly dedicated to the Lyapunov direct method. Still, some attention is also paid to the method of limiting equations because it can be used to study motion stability even in hopeless cases when other methods fail. The issue of constructing of the Lyapunov function is a key element in applications of the direct method, and this chapter provides several methods of constructing the function. In the end, a string of examples illustrating the use of the Lyapunov direct method is posted. Chapter five contains a detailed presentation of the comparison method and its use in the stability research. This method, being is essential part of the qualitative theory of equations, is particularly central in studies of largescale systems. In the method, some differential inequalities and Lyapunov functions allow nonlinear transformations of the original system to an equation (a system or a matrix system) of a lower dimension.

The idea of delimiting and estimating so-called stability domains is developed in chapter six, where also a qualitative comparison of different stability procedures is made. The evaluation of the efficiency of various methods is conducted by applying, in each case, the same vector norm as a measure of the distance between solutions - no surprise the Lyapunov direct method wins the competition. The contrast between various method results is shown using an example of a simple second-order differential equation. Moreover, for linear systems, the notion of the "best" Lyapunov function is made. Manifolds of non-holonomic equations of motion are in the focus of chapter seven. Application of topological manifolds and mapping techniques prove to be effective tools in the stability research that extends more and more to advanced fields of mathematics. The chapter reviews specific applications of the Lyapunov direct method to investigations of invariant manifolds and some practical results of the topological fixed point theory.

Chapter eight deals with recurrence equations, difference equations, and difference inequalities that mainly are associated with discrete dynamic systems. These types of models are usually obtained by converting the time-continuous dynamics into discrete-time dynamics by employing the Poincare-type mappings. The main objective is the stability investigation of solutions and its estimates.

Chapter nine is limited to a short overview of some stability issues for delay differential equations modelling some practical processes and systems with aftereffect phenomena - the main worry is about the compensation for the loss of stability due to delay in the system. Linear models are discussed, but the emphasis is put on Lyapunov functionals for nonlinear equations.

Chapter ten on partial differential equations, not including the means of discretization to the stability analysis, uses an approach based on the utilization Lyapunov functionals. The Lyapunov theory is exercised here in relation to a particular class of continuous models - it is an outline of some techniques rather than the methodology. The presented here approach is anecdotal, and it is based on specific cases and examples.

Chapter eleven presents some samples of the probabilistic approach to stability matters. This category of problems is necessary when in the modelling process, it turns out that the excitations are not clear, not defined, or not repeatable. In the present considerations, the stability study is reduced to examining the stability of the trivial solution, and the focus is on the almost-sure probability.

The last chapter provides a brief introduction to themes of chaos, focusing on the dependence of chaos on the Lyapunov exponent. The irregular behaviour of solutions of motion which is identified with chaos is not due to stochastic forcing or sensitive dependence on initial conditions. The real reason for it is the exponential rate of the distance between the trajectories due to nonlinearities of the system – the Lyapunov exponent is a measure of it.

5. Comparison Method and Stability of Motion