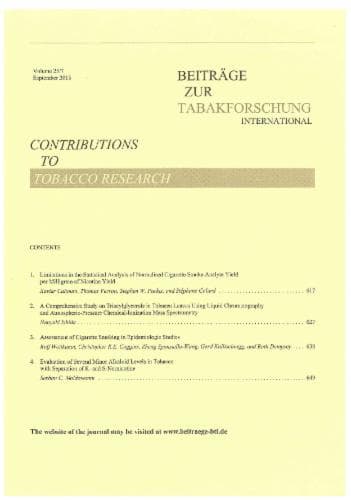 In this editorial, we regret that we have to announce the death of four persons, who all had a special relationship to tobacco science and also to our :

Obituaries of Professors Franz Adlkofer and Elmar Richter are printed below.

On March 30th, 2022, Professor Ulrich Mohr passed away at the age of 91. He was a renowned pathologist at the Veterinarian University of Hanover and a co-founder of the Fraunhofer Institute of Toxicology and Experimental Medicine (ITEM) in Hanover. Ulrich Mohr worked for more than four decades on the and toxicology of tobacco smoke. An appreciation of his scientific merits will appear in in the near future.

On 21st June of this year, Mrs. Ilse Hoffmann passed away. Together with her husband, the late Dr Dietrich Hoffmann, she published a number of milestone papers on the analysis of tobacco smoke and the changing cigarette, some of them also in this . As a chemist, she was a co-worker of her husband at the Sloan Kettering Institute for Cancer Research, NYC, and the American Health Foundation, Valhalla, New York, for almost four decades. Only a few years ago, one of us (WDH) had the pleasure to spend some time and eat lunch with Ilse Hoffmann aside the Hudson River in New York, intensely discussing future publications in the “”.

It is our sad duty to inform our readers that Professor Franz Adlkofer died in Paros, Greece on June 18th, 2022 at the age of 86. For us, this sad news came unexpectedly, since from our phone calls several weeks before his death, we got the impression that Franz was physically and mentally in comparatively good health.

Franz Adlkofer studied medicine at Ludwig-Maximilians-University (LMU) Munich and completed his doctorate in 1966 at the Max-Planck-Institute for Biochemistry in Munich with Nobel Laureate Professor Adolf Butenandt acting as one of his supervisors. Between 1965 and 1976 Franz Adlkofer qualified as an internist and habilitated in 1974 at Freie Universität (FU) Berlin.

In September 1976, Professor Franz Adlkofer became director of the scientific department of the Verband der Cigarettenindustrie (VdC) in Hamburg, Germany. He also took over the position of a Scientific Secretary of the Research Council on Smoking and Health, later (1992) transferred to the Stiftung Verhalten und Umwelt (VERUM Foundation), of which Franz Adlkofer became director. Both of us started our collaboration with Franz Adlkofer in 1978, as internal research assistant (GS) and as external statistical advisor for research projects (WDH). Shortly afterwards (in 1980), a research laboratory was established in Munich under the leadership of Professor Helmut Schievelbein, a famous nicotine researcher in Germany, whom Adlkofer succeeded as head of the Munich laboratory in 1986. In these three functions, which he held until 1995, Professor Franz Adlkofer followed a clear and exclusively science-driven strategy with two focus areas: the less harmful cigarette (LHC) and nicotine. A third field of research, which was mainly imposed from outside was the issue of passive smoking (exposure of non-smokers to environmental tobacco smoke, ETS). Adlkofer was convinced that nicotine was central for the use of tobacco products and that harm-reduced products should provide sufficient nicotine to the user and as low levels as possible only of toxicants. For this strategy, it was necessary to investigate all aspects of nicotine, in particular its toxicological and pharmacological effects. In his roles as a secretary of the Research Council on Smoking and Health and director of the VERUM Foundation, he organized two outstanding conferences entitled ”, 1990 in Hamburg, Germany and 1994 in Montreal, Canada, which have been published as congress volumes and provide an excellent overview of the state of knowledge at that time. Due to his empathic character and his good reputation as a scientist, Professor Franz Adlkofer was able to make and cultivate contacts to most important scientists in the area of smoking and health worldwide, among them Ernest Wynder, Dietrich Hoffmann, Steven Hecht, Gio Gori, Neal Benowitz, Michael Russell, Karl Bättig, Francis Roe, Ed Domino, to just name a few of them. In the time period when working in the VdC (1976 – 1995), Adlkofer published more than 100 papers in peer-reviewed, mostly medical and toxicological journals. This is remarkable, given the difficulties for industry-based tobacco scientists to publish in the field of smoking and health. We would regard this as proof of Adlkofer's strictly scientific approach to plan, design, perform and present research in this field. Of course, even he had to struggle with refusal by so-called independent scientists owing to his industry entrenchment. However, Adlkofer's advocating of the LHC was also controversially discussed within the industry, leaving him to ‘fight a two-front war’ occasionally throughout his career in the field of smoking and health.

Professor Franz Adlkofer served as the editor of “ from 1978 to 1995 and thus was the immediate predecessor of both of us in this role. We think that it is fair to state that the “’ was not his most beloved “child” in scientific terms. Unlike his predecessor and founder of “”, Dr. Karl-Heinz Weber, he wanted to reposition the from a mostly technical, chemical and (tobacco) biological orientation to a scope with the focus on tobacco harm reduction. In our view, the opening of the in the last two decades to topics favored by Adlkofer and in particular the recent name change to “” would have certainly pleased him. Unfortunately, we had no more opportunity to discuss with Franz (yes, we were on first name terms with him since a few years) this issue.

We both owe Franz Adlkofer a lot in our careers. In particular, his approach of clearly defining a target and trying to achieve it with the best (technical and scientific) methods available is mostly successful, even if sometimes apparently unsurmountable obstacles have to be overcome. Franz Adlkofer is survived by his wife Karin, four children (Michael, Kathrin, Carsten, Julia) and 10 grandchildren. Those who met him will remember Franz Adlkofer as a strong character, who vehemently followed his scientifically-deduced convictions, but who also was a warmhearted person towards those he liked and trusted in.

It is our sad duty to inform our readers that Professor Elmar Richter passed away on June 8th, 2022 at the age of 77. Franky, as he was known by his friends worldwide, finally succumbed to a cancer disease, which he was able to successfully combat with great optimism for more than three years. Until the end, Franky was active as an animal welfare officer for studies at Ludwig-Maximilians-University Munich (LMU). We as editors of had the pleasure to discuss with Franky his newest ideas on the research area of nicotine and tobacco-specific nitrosamines, one of his scientific fields of interest. He significantly contributed to a comprehensive review on nicotine, which is going to be published in our soon.

Elmar Richter studied veterinary medicine at LMU and earned his doctoral degree in 1974. He habilitated at the Institute for Pharmacology, Toxicology and Pharmacy at the Veterinary Faculty of LMU with investigations on metabolism of nitrosamines in rats in 1988.

We both came into contact with Professor med. vet. Richter by end of the 1980ies, when his work on tobacco-specific nitrosamines was funded by the German Research Council on Smoking and Health. In the 25 years to follow, TSNA metabolism in various organs as well as in rodent and human studies remained in the focus of Professor Richter's research. In addition, he and his coworkers developed sensitive analytical methods for the determination of hemoglobin and DNA adducts for the application in human biomonitoring studies. The risk of passive smoking became a controversially discussed issue in this time period. Professor Richter actively participated in this debate by publishing data on hemoglobin adducts of aromatic amines in smokers, non-smokers and children. The chemistry and toxicology of aromatic amines became an additional field of expertise of Professor Richter's, on which he also wrote a chapter in a German textbook of toxicology. One of us (GS) also had the honor to co-author with him the chapter on smoking and passive smoking in this textbook.

Franky Richter was one of the few and far between scientists in academics who did not shy away from cooperating with scientists working in the tobacco industry. The only precondition for him was that this cooperation must be exclusively based on scientific facts. We know of no serious scientist, who could not accept this prerequisite. Not surprisingly, Professor Richter had to withstand hostilities from parts of the scientific community and the public. However, Franky never became shaky and stood to his convictions.

Franky Richter accepted our invitation to become a member of the Advisory Board of our in 2014 and actively collaborated until his death.

Franky is survived by his wife Steffi and his son Basti. All who met him will have warm-hearted recollections of Franky as a humorous and cordial person as well as a sound and excellent scientist.