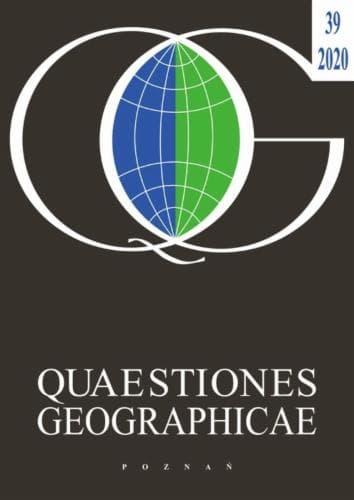 The 100th anniversary of the Polish Geographical Society is an important historic event for the development of geography in Poland. Through the efforts of the Committee on Geographical Sciences of the Polish Academy of Sciences and the Polish Geographical Society, 2018 has been announced the Year of Polish Geography. It is a great opportunity to review the development of geography and the assessment of its theoretical and practical functions. Over the last hundred years, changes in Polish geography have reflected the global tendencies in geographical sciences from qualitative, descriptive and regional approaches through quantitative and systemic ones, up to the development of modern, digital geoinformation platforms. Polish geography, due to its two-dimensional character of natural and social sciences, provides data and information, and establishes regularities in terms of physical and environmental as well as socio-economic and political changes in the geographic space. The output of Polish geographers includes first of all the domestic issues, but also many European and global programmes and research projects together with the research involving expeditions to various parts of the world thanks to which Polish geographers contribute their scientific work to the current trends in geographical research in Europe and in the world. This makes Polish geography an important link and guarantees its position in the contemporary system of science as well as in world geography.

In the 100-year-old history of the development of Polish geography an important role has been played by the Poznań geographical centre and the nation- and worldwide journal . The journal was established in 1974 as an annual of the then Institute of Geography, Adam Mickiewicz University (AMU). It was one of the few Polish journals issued in English at the time.

Its founder and first editor was Professor Stefan Kozarski. At present the journal is published quarterly by the Faculty of Geography and Geological Sciences of AMU, the largest geographical faculty in Poland. The scope of the journal covers issues in both physical and socio-economic geography in many research fields, including also environmental science, spatial management and planning, GIS and geoinformation, regional studies, tourism and recreation. The primary mission of is to assist researchers in promoting their achievements in the worldwide scientific community. The journal opens up the possibility of presenting discoveries and achievements of geographers not only from Poland, but also from the entire world. For over 40 years the journal has become increasingly important on the international market of geographical magazines which has been manifested by a significant increase in citations after 2010 (Fig. 1). A quarterly is published not only in the traditional version, but also on the digital platform of de Guryter, and also indexed in the bases such as: AGRO, CABI, Clarivate Analytics – Emerging Sources Citation Index, Clarivate Analytics – Web of Science, Current Geographical Publications, DOAJ, EBSCO, Elsevier – SCOPUS, ERIH PLUS, GeoRef, Google Scholar, Index Copernicus, Microsoft Academic, POL-index, Publons, SCImago, WorldCat.

All the activities undertaken by the Editorial Board and Editorial Advisory Board aim to make the journal increasingly international in scope, in spite of growing competition. In the eyes of the readers the journal is distinct in terms of a thorough layout and the short term of publication. Contributions with a deep theoretical and methodological background in geosciences, overviews and comparative studies representing different geographical areas are highly preferred. In the theme issues, published from time to time, presented such topical questions as the urban geosites in selected European cities, or the volume in preparation concerning web applications in public participation incorporated in geographical information systems for spatial planning.

This occasional volume of is devoted to different topical geographical questions. We wish to demonstrate the selected issues that Polish physical geographers dealt with in the period prior to the 100th jubilee of Polish geography. They also involve the research implemented in the international cooperation. This volume consists of the articles from almost all physico-geographical subdisciplines. The presented research results concern the problems of our country, but there are also the results of research conducted outside Poland. Thus, in terms of geomorphology, there is an article about the identification of forms in the area of mountains made up of granite rocks in South Korea and China (Migoń et al. 2018). Another article on geomorphology provides an overview of the costal dunes along the Baltic Sea (Łabuz et al. 2018). And finally, the third one, on the borderline between geomorphology and tourism, touches the subject of the designation and characteristic of geopositions for geotourism management (Bouzekraoui et al. 2018). Hydrological issues are represented by the article describing a characteristic process of the disappearance of lakes in the post-glacial areas deriving from the last Scandinavian glaciation (Marynowska 2018). Two subsequent papers concern climatology. The first one presents current and prospective regional differences in diseases related to climate conditions in Poland (Błażejczyk et al. 2018). Whereas the other one is a comprehensive overview of the Polish input into the research on the snow cover in Poland and in different areas of the world where Poles conducted this kind of research (Falarz et al. 2018). In the end, two articles on geographic education are worth mentioning. Both of them involve the issues of teaching Polish and foreign students using various methods (Cichoń, Piotrowska 2018; Markuszewska et al. 2018).

We hope that this special publication of will contribute to the celebration of the 100th anniversary of Polish geography continuing its most glorious tradition.