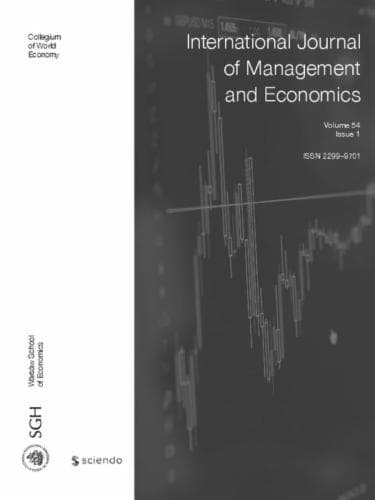 Welcome to the second issue of the in 2021, volume 57. It consists of four empirical and two conceptual papers in various areas of economics and management. The geographical scope of this issue is generally confined to Europe, with a special emphasis on Poland.

Joanna Mazur and Magdalena Slok-Wodkowska in the first article entitled “The European Union's Regional Trade Agreements. How the EU addresses challenges related to digital transformation?”, provide an insight into the regulatory solutions of the e-commerce sector adopted in the regional trade agreements (RTAs) of the European Union (EU). The authors argue that even though the regulatory dimension of global economic trade attempts to somehow address the issues resulting from the specific characteristics of the digital economy, the process is still in its infancy. The majority of provisions do not consider the key problems that impede international digital trade.

The second article is entitled “Misselling consumer awareness study. Circumstances surrounding the occurrence of misselling,” and it is by Czesław B. Martysz and Jan P. Rakowski. The authors define misselling as “the sale of financial services that do not meet the needs of consumers or the mere way in which they are sold, which is not appropriate to the nature of those services.” They present the most important circumstances surrounding the occurrence of misselling and later examine the level of consumers’ awareness and knowledge of the problem. They suggest possible ways to protect against misselling, among which the most important postulate is to increase the level of consumers’ financial education.

The third paper, entitled “Perception of Sources of Private Wealth. A qualitative study of perceptive schemes of Western and Eastern-Bloc students,” is by Joanna Pietrzak. The study uses directed qualitative content analysis of 115 essays written by students from Poland, Austria, Russia, The Netherlands, Germany, Sweden, and Ukraine. A structured matrix of four predetermined sources of wealth—CEO compensation, financial trading, entrepreneurship, and inheritance—was developed and subsequently confronted with students’ perceptions. As a result, two conceptual models were developed, presenting differences in perceptive schemes of students from Western and Eastern-Bloc countries. Then, the perceptions were confronted with empirical data from the Forbes List of Billionaires. This paper provides an interesting example of how essays written by students can become a source of empirical research. It is also a good example of employment of directed qualitative content analysis in socioeconomic research.

The fifth article, “Power asymmetry and value creation in B2C relationship networks,” is by Marcin Wieczerzycki. The purpose of this paper is to explore the problem of power distribution within networks of relationships between companies and consumers and to analyze the ways in which value is created in such structures. The author applies the network approach to multiple theoretical constructs describing collective consumer behavior, carried over from the field of sociology to management science. Based on literature and interesting case study analysis, he proposes following the typology of B2C networks: “ – centred around and dominated by a company, with no relationships between consumers themselves, creating value through crowd-sourcing; – also centred around a company, but independent to a degree and more focused on C2C relationships, creating value through consumer-managed projects; – where companies serve only as peripheral actors, and their products as potential symbols of affiliation, with value being created through creation and reinterpretation of said products’ meanings (sign value).”

The final paper in this issue is about some specific aspects in taxation of foreign direct investment (FDI) in Poland in the context of recent developments aimed at prevention of international tax avoidance. Magdalena Janiszewska and Marcin Jamroży in their article entitled “Permanent establishment as a foreign direct investment in Poland: Identification of tax barriers in the context of new tax development” draw our attention to potential negative consequences to economic activity as a result of the new approach to taxation of FDI in Poland, particularly in the legal form of “a permanent establishment.” The study relies on the most current tax rulings and judgments of administrative courts issued between 2017 and 2020. The authors conclude that not so much the effective tax burden but the regulatory ambiguity surrounding the tax obligations may contribute to the reduction of Poland's attractiveness as a location for FDI.

As on all previous occasions, we hope that this issue of the will be an inspiring source of knowledge for a large group of our Dear Readers. We encourage you to cite articles in your academic works. Our publishing system constantly searches for cross-references and notifies our authors each time the paper is cited in an online source.